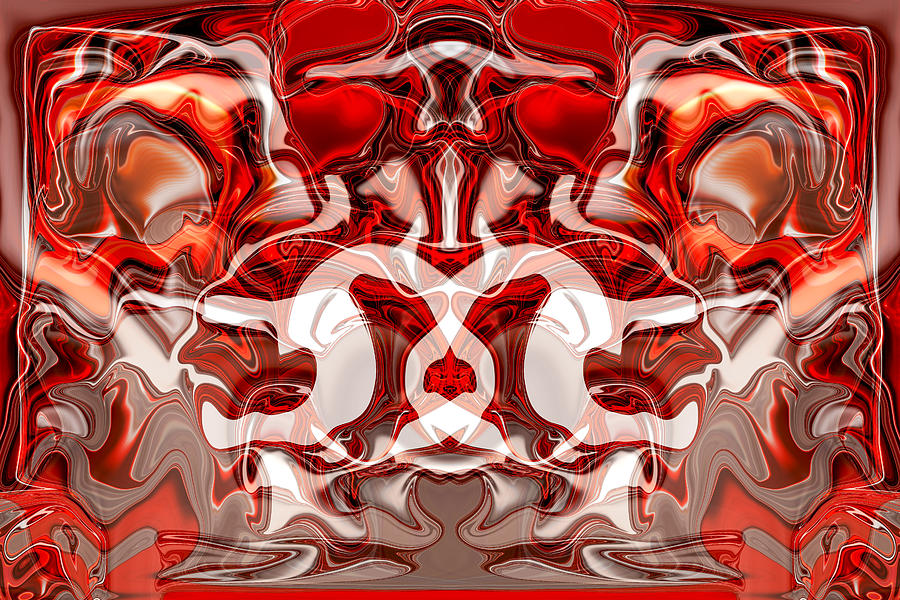 The Crimson and Grey and White reminds me of WSU or Washington State University. This abstract take on a cougar is for my husband who is an alumnus of this school.

"Washington State University is a public research university based in Pullman, Washington, in the Palouse region of the Pacific Northwest. Founded in 1890, WSU (colloquially referred to as Wazzu) is the state's original and largest land-grant university. The university is well known for its programs in chemical engineering, veterinary medicine, agriculture, animal science, food science, plant science, architecture, neuroscience and communications. It is ranked in the top-ten universities in the US[4] in terms of clean technology and it is one of 96 public and private universities in America with "very high research activity," as determined by the Carnegie Foundation for the Advancement of Teaching.[5] WSU is ranked among the top half of national universities at 115th according to U.S. News and World Report. With an undergraduate enrollment of 21,816 and a total student enrollment of 27,008, it is the third largest institution of higher education in Washington state.

The university also operates campuses across Washington known as WSU Spokane, WSU Tri-Cities, and WSU Vancouver, all founded in 1989. In 2012, WSU launched an Internet-based Global Campus, which includes its online degree program, WSU Online. These campuses award primarily bachelor's and master's degrees. Freshmen and sophomores were first admitted to the Vancouver campus in 2006 and to the Tri-Cities campus in 2007. Total enrollment for the four campuses and WSU Online exceeds 25,900 students.[6] In 2009, this included a record 1,447 international students, the highest since 1994 when there were 1,442.[7]

WSU's athletic teams are called the Cougars and the school colors are crimson and gray. The six men's and nine women's varsity teams compete in NCAA Division I in the Pacific-12 Conference." - Wikipedia

This painting started out as a picture of handblown glass created by Garth Mudge of Glassworks in Winthrop Wa. Glassworks is located downtown in the beautiful Methow Valley in Okanogan County .
I painted and reflected the original image into a whole new image. I am retaining as much of the original textures as possible. I am using only the colors that originated in the picture when it was a photograph. I am using these colors as a starting point for the picture. Then I choose which textures to use to complement the colors. Then I start painting and when I have painted to my hearts content I create a new layer, reverse it and overlay it onto the original image. I call this a Reflection.
I am really enjoying using the photographs I have taken over the years as starting points for new individual artworks. I lover the tools that are available to help us create ever new and changing art works. A Wacom tablet and Photoshop software have opened up a whole new world of creative options for me

great work and so much going on! v

What a wonderful and engaging abstract!

I love this abstract design, the light and shapes are great! v.

Stunning work I love the use of the light