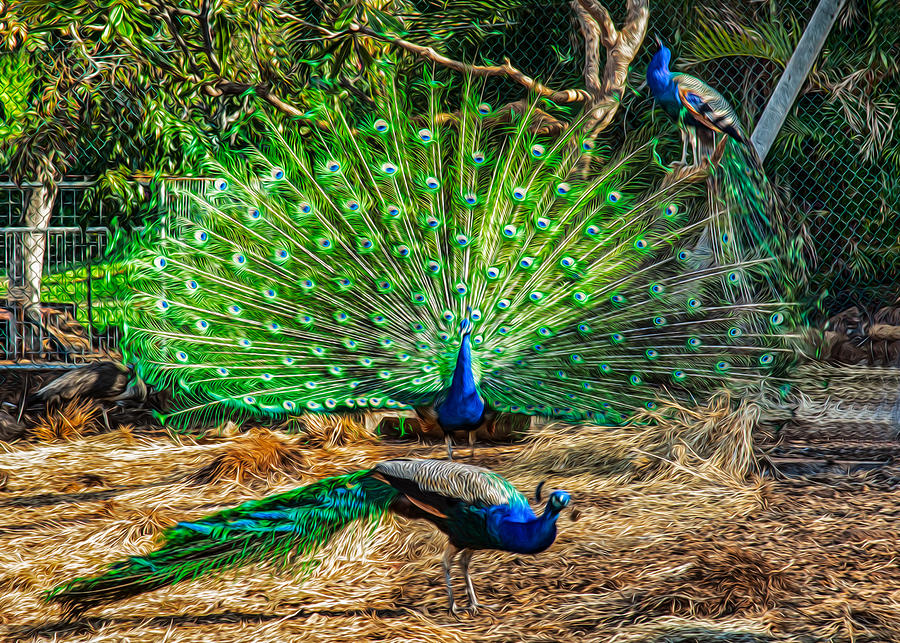 When it is obvious that the goals cannot be reached, don't adjust the goals, adjust the action steps. ~Confucius

In the Pua Mua botanical garden, there is an aviary with peacocks and other birds.

From Wikipedia "Peafowl are two Asiatic species of flying bird in the genus Pavo of the pheasant family, Phasianidae, best known for the male's extravagant eye-spotted tail, which it displays as part of courtship. The male is called a peacock, the female a peahen, and the offspring pea chicks.[1] The adult female peafowl is grey and/or brown. Peachicks can be between yellow and a tawny colour with darker brown patches or light tan and ivory also referred to as "dirty white". The term also embraces the Congo Peafowl, which is placed in a separate genus Afropavo.

Indian Peafowl, Pavo cristatus, a resident breeder in South Asia. The peacock is designated as the national bird of India and the provincial bird of Punjab.
Green Peafowl, Pavo muticus. Breeds from Burma east to Java. The IUCN lists the Green Peafowl as endangered due to hunting and a reduction in extent and quality of habitat. It is a national symbol in the history of Burma.
Congo Peafowl Afropavo congensis.

The name for a group of peafowl is a pride, or an ostentation.
The male (peacock) Indian Peafowl has iridescent blue-green or green colored plumage. The peacock tail ("train") is not the tail quill feathers but the highly elongated upper tail covert feathers. The "eyes" are best seen when the peacock fans its tail. Like a cupped hand behind the ear, the erect tail-fan of the male helps direct sound to the ears.[citation needed] Both species have a crest atop the head. The female (peahen) Indian Peafowl has a mixture of dull green, brown, and grey in her plumage. She lacks the long upper tail coverts of the male but has a crest. The female can also display her plumage to ward off female competition or signal danger to her young.
The Green Peafowl appears different from the Indian Peafowl. The male has green and gold plumage and has an erect crest. The wings are black with a sheen of blue. Unlike the Indian Peafowl, the Green Peahen is similar to the male, only having shorter upper tail coverts and less iridescence."

This is extraordinary Omaste ♥ I adore peacocks ♥ F/L

How Lovely Omaste, so natural and pretty. they are such a beautiful bird... Sherri

Thank you very much to the anonymous collector who purchased a print of one of my favorite pictures of all time. I really appreciate you and your support. Have a wonderful day.

This is beautiful, Omaste!! Congratulations on your many sales today!! You must be thrilled!!! v

This was so amazing I voted and pinned!

Lovely work Omaste. It's so good that you have Peacocks in various poses, showing off, standing and perched, they're such beautiful birds

Thank you very much to my anonymous buyer in Charlotte NC. I love that you purchased this print on metal. I imagine that the colors will be just amazing on this surface. I hope that you enjoy it for years to come.

congrats on your sale!

Nice work......Congrats on your sale!

Congrats on your sale!!!!

Congrats on your sale Omaste!!