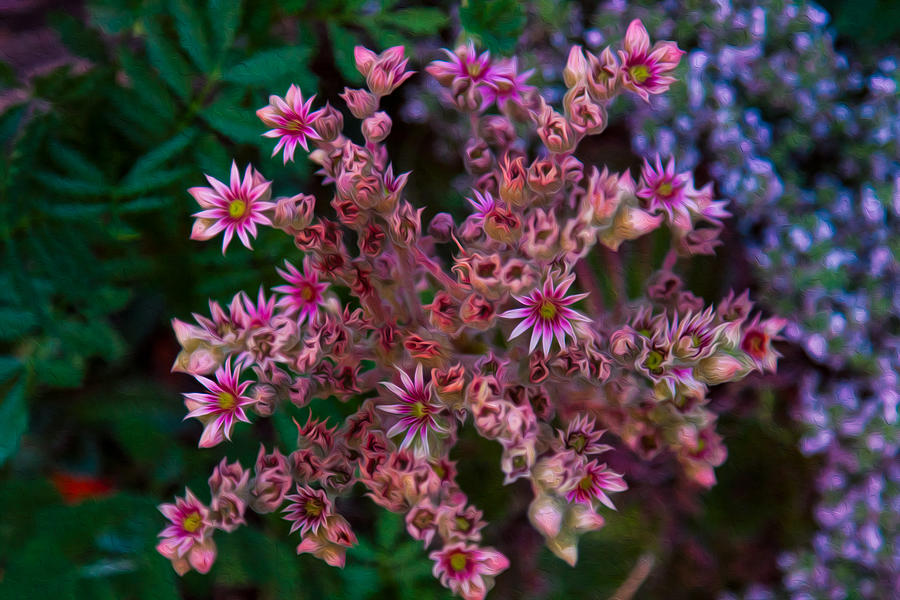 This photograph was taken in Winthrop Wa (Washington State), in the beautiful Methow Valley. The Methow is a small jewel of an area not too far from Seattle in the Pacific Northwest. Okanogan County is such a great place to live for all of the sunshine and outdoors recreation.

My garden in the spring is a magical place to be. Here in Winthrop this flower will show up in about June depending on where exactly you live. Twisp, Winthrop, Mazama and Carlton each have their own time when it blooms. Seattle has a much longer growing season than we do.
----------------
I started with a digital photograph and used a HDR process to tone map the light. Then I applied a finishing oil paint layer to add texture to the overall image. I did some tonal work to even out the colors and make them realistic to what I was seeing in nature but not excessively.
I am interested in photography as an "unusual" or "unique" image making process. In other words I enjoy starting with a photograph of an ordinary scene or subject and then I try to make it my own by adding unusual processing techniques. I hope you enjoy viewing my work as much as i enjoy creating it.
---------------------
Explore the attractive custom framing and matting options available on this page; all are competitively priced.
If you have any questions about my images or need assistance with sizing, framing, etc., please contact me, before placing your order, at [email protected]
----------------------------
Sedum
From Wikipedia �Sedum is a large genus of flowering plants in the family Crassulaceae, members of which are commonly known as stonecrops. It contains around 400 species of leaf succulents that are found throughout the Northern Hemisphere, varying from annual and creeping herbs to shrubs. The plants have water-storing leaves. The flowers usually have five petals, seldom four or six. There are typically twice as many stamens as petals.
A number of species, formerly classified as Sedum, are now a separate genus Hylotelephium.
Well known European Sedums are Sedum acre, Sedum album, Sedum dasyphyllum, Sedum reflexum (also known as Sedum rupestre) and Sedum hispanicum.
Ornamental
Many sedums are cultivated as garden plants, due to their interesting and attractive appearance and hardiness. The various species differ in their requirements; some are cold-hardy but do not tolerate heat, some require heat but do not tolerate cold.
Numerous hybrid cultivars have been developed, of which the following have gained the Royal Horticultural Society's Award of Garden Merit:-
� 'Herbstfreude' ('Autumn Joy')[2]
� 'Bertram Anderson'[3]
� 'Matrona'[4]
� 'Ruby Glow'[5]
As food
The leaves of all stonecrops are edible.[6]
Sedum reflexum, known as "prickmadam", "stone orpine", or "crooked yellow stonecrop", is occasionally used as a salad leaf or herb in Europe, including the United Kingdom.[7] It has a slightly astringent sour taste.
Sedum divergens, known as "spreading stonecrop", was eaten by First Nations people in Northwest British Columbia. The plant is used as a salad herb by the Haida and the Nisga'a people. It is common in the Nass Valley of British Columbia.[8]
Biting Stonecrop (Sedum acre) contains high quantities of piperidine alkaloids (namely (+)-sedridine, (−)-sedamine, sedinone and isopelletierine), which give it a sharp, peppery, acrid taste and make it somewhat toxic.
Traditional
S. acre was used to treat epilepsy and skin disease, as well as an abortifacient in ancient Greece.[citation needed] Outright consumption may cause irritations of the mucous membranes, cramps, paralysis, and respiratory paralysis.[citation needed]
Roofing
Sedum can be used to provide a roof covering in green roofs,[9] where they are preferred to grasses.[10] Ford's Dearborn Truck Plant�s living roof has 10.4 acres (42,000 m2) of sedum. Rolls-Royce Motor Cars plant in Goodwood, England, has a 22,500 square metres (242,000 sq ft) roof complex covered in Sedum, the largest in the United Kingdom.[11] Nintendo of America's roof is covered in some 75,000 square feet of Sedum.[12]
Ecology
Sedum species are used as food plants by the larvae of some Lepidoptera species including Grey Chi. In particular, Sedum spathifolium is the host plant of the endangered San Bruno elfin butterfly of San Mateo County, California.�

beautiful shot and great effect with the flowers!

Lovely and I like this perspective on these flowers.