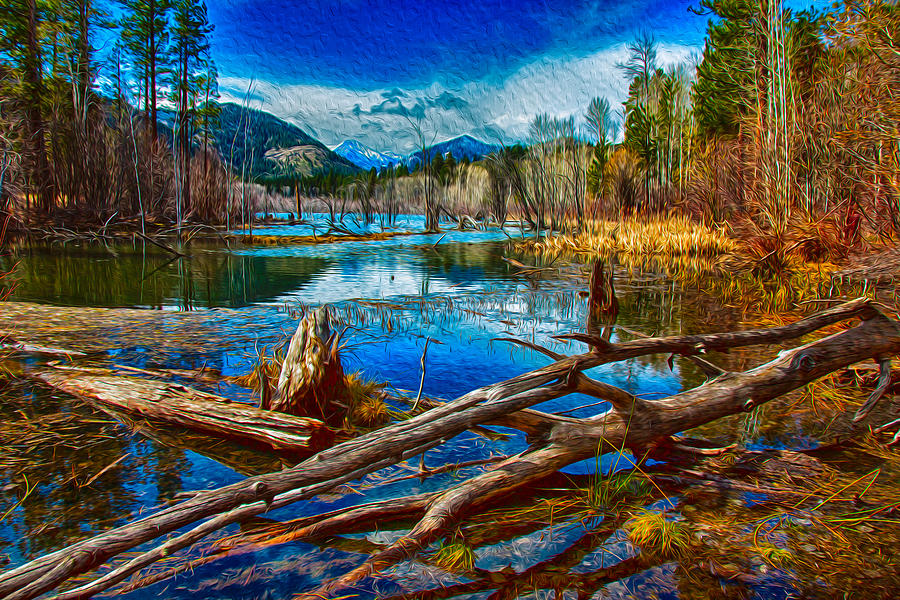 Located near Sun Mountain Lodge in Winthrop Wa.
This beaver pond is a nice location to look at Mount Gardner.

The light which puts out our eyes is darkness to us. Only that day dawns to which we are awake. There is more day to dawn. The sun is but a morning star. ~Henry David Thoreau

From Wikipedia -
"Beaver dams are dams built by beavers as protection against predators such as coyotes, wolves, and bears, and to provide easy access to food during winter. Beavers work at night and are prolific builders, carrying mud and stones with their fore-paws and timber between their teeth. Beavers can rebuild primary dams overnight, though they may not defend secondary dams as vigorously.
Samuel Hearne wrote: "their dams, by frequent repairing, become a solid bank, capable of resisting a great force both of ice and water; and as the willow, poplar and birch generally take root and shoot up, they by degrees form a kind of regular planted hedge, which I have seen in some places so tall that birds have built their nests among the branches."[citation needed]
Canoeists try unsuccessfully to run a beaver dam in Algonquin Park. The dam is about 1 m (3 ft 3 in) high.
Disruption

Beaver dams can be disruptive; the flooding can cause extensive property damage, and when the flooding occurs next to a railroad roadbed, it can cause derailments by washing-out the tracks, or when a beaver dam bursts and the resulting flash flood overwhelms a culvert. Traditional solutions to beaver problems have been focused on the trapping and removal of all the beavers in the area. While this is sometimes necessary, it is typically a short-lived solution, as beaver populations have made a remarkable comeback in the United States (after near extirpation in the nineteenth century) and are likely to continually recolonize suitable habitat.[1] Modern solutions include relatively cost-effective and low maintenance flow devices. However, introduced to an area without its natural predators, as in Tierra del Fuego, beavers have flooded thousands of acres of land and are considered a plague. One notable difference in Tierra del Fuego from most of North America is that the trees in Tierra del Fuego cannot be coppiced[citation needed] as can willows, poplars, aspens, and other North American trees. Thus the damage by the beavers seems more severe. The beaver's disruption is not limited to human geography; beavers can destroy nesting habitat for endangered species, and often destroy mature trees for which they have no use.[citation needed]
Dam building can be very beneficial in restoring wetlands. Such wetland benefits include flood control downstream, biodiversity (by providing habitat for many rare as well as common species), and water cleansing, both by the breakdown of toxins such as pesticides and the retention of silt by beaver dams. Over the eons, this collection of silt produces the rich bottom land so sought after by farmers. Beaver dams reduce erosion as well as decrease the turbidity that is a limiting factor for much aquatic life. While beavers can create damage, part of the problem is one of perception and time scale. Such damage as the undermining of a roadway or the drowning of some trees is very visible shortly after the beginning of beavers activity in an area. The benefits may be long-term and unnoticed except, for example, by someone monitoring a catchment.
Flood control

A beaver dam has a certain amount of freeboard above the water level. When heavy rains occur, the river or lake fills up and the dam gradually releases the extra stored water. Often this is all that is necessary to reduce the height of the flood wave moving down the river, and will reduce or eliminate damage to human structures. Flood control is achieved in other ways as well. The surface of any stream intersects the surrounding water table. By raising the stream level, the gradient of the surface of the water table above the beaver dam is reduced, and water near the beaver dam flows more slowly into the stream. This further helps in reducing flood waves, and increases water flow when there is no rain. Beaver dams also smooth out water flow by increasing the area wetted by the stream. This allows more water to seep into the ground where its flow is slowed. This water eventually finds its way back to the stream. Rivers with beaver dams in their head waters have lower high water and higher low water levels.
Excess nutrient removal
Beavers that work on top of heavy snowfall make cuts that are high above ground.

Beaver ponds can cause the removal of nutrients from the stream flow. Farming along the banks of rivers often increases the loads of phosphates, nitrates and other nutrients, which can cause eutrophication and may contaminate drinking water. Besides silt, the beaver dam collects twigs and branches from the beavers' activity and leaves, notably in the fall. The main component of this material is cellulose, a polymer of β-glucose monomers (This creates a more crystalline structure than is found in starch, which is composed of α-glucose monomers. Cellulose is a type of polysaccharide.) Many bacteria produce cellulase which can split off the glucose and use it for energy. Just as algae get their energy from sunlight, these bacteria get their energy from cellulose, and they form the base of a very similar food chain. However, a source of energy is not enough for growth. These bacterial populations face serious shortages of nitrogen and phosphorus compounds, and will absorb these nutrients as they pass by in the water stream. In this way, these and other nutrients are fixed into the beaver pond and the surrounding ecology, and are removed from the stream."

Wow, indeed, Joyce recommended your work on Facebook and surely it is gorgeous! v/f

beautiful, congratulations on your sale.

Returning to enjoy this beauty again!