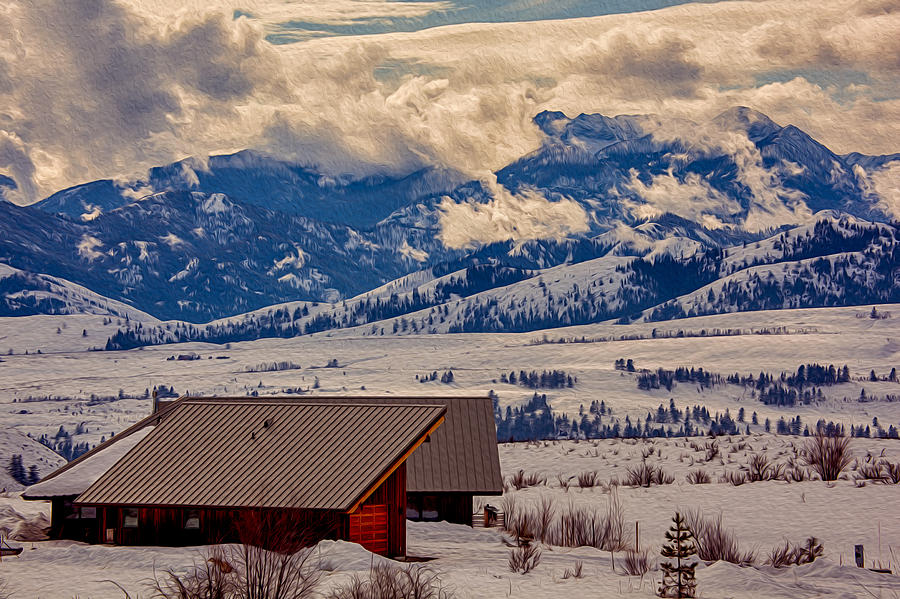 This photograph was taken in Wa (Washington State), in the beautiful Methow Valley. The Methow is a small jewel of an area not too far from Seattle in the Pacific Northwest. Okanogan County is such a great place to live for all of the sunshine and outdoors recreation.
I started with a digital photograph and used a HDR process to tone map the light. Then I applied a finishing oil paint layer to add texture to the overall image. I did some tonal work to even out the colors and make them realistic to what I was seeing in nature but not excessively.
I am interested in photography as an "unusual" or "unique" image making process. In other words I enjoy starting with a photograph of an ordinary scene or subject and then I try to make it my own by adding unusual processing techniques. I hope you enjoy viewing my work as much as i enjoy creating it.
---------------------
Explore the attractive custom framing and matting options available on this page; all are competitively priced.
If you have any questions about my images or need assistance with sizing, framing, etc., please contact me, before placing your order, at [email protected]
------
From Wikipedia
"The North Cascades are a section of the Cascade Range of western North America. They span the border between the Canadian province of British Columbia and the U.S. state of Washington and are officially named in Canada as the Cascade Mountains.[1] They are predominantly non-volcanic, but include the stratovolcanoes Mount Baker, Glacier Peak and Coquihalla Mountain, which are part of the Cascade Volcanic Arc. The portion in Canada is known as the Canadian Cascades, a designation that also includes the mountains above the east bank of the Fraser Canyon as far north as the town of Lytton, at the confluence of the Thompson and Fraser Rivers.

The US portion of the North Cascades and the adjoining Skagit Range in British Columbia are most notable for their dramatic scenery and challenging mountaineering, both resulting from their steep, rugged topography. While most of the peaks are under 10,000 feet (3,000 m) in elevation, the low valleys provide great local relief, often over 6,000 feet (1,800 m). The summits of the rest of the Canadian Cascades are not glaciated in the same way and feature rock "horns" rising from plateau-like uplands, with the Manning Park and Cathedral Park areas known for their extensive alpine meadows, as is also the case with the eastern flank of the US portion of the range. Portions of the US side of the range are protected as part of North Cascades National Park.
Geography
Typical landscape in the western part of the North Cascades
Main article: Geography of the North Cascades

The large amount of precipitation, much of it in the form of snow, and the resulting glaciation, combine with the regional uplift to create a dramatic landscape in the western part of the range. Deep, U-shaped valleys carved by glaciers in Pleistocene time separate sharp ridges and peaks carved into steep shapes by more recent snow and ice. The eastern and northernmost parts of the range are much more plateau-like in character, though in the case of the northernmost areas graven by deep valleys along the flank of the Fraser Canyon, notably that of the Anderson River.
Extent

The Fraser River and the adjoining lowland on its south bank form the northern and northwestern boundary of the range. On the east, the Okanogan River and the Columbia River bound the range in the United States, while the northeastern boundary of the range departs the Thompson via the Nicoamen River and runs via Lawless Creek, the Tulameen River and Copper Creek to the Similkameen River. On the west, the foothills of the range are separated by a narrow coastal plain from Puget Sound except along Chuckanut Drive between Bellingham and Mount Vernon, where they abut the Sound directly.

The southern boundary of the North Cascades is less definite. For the purposes of this article, it will be taken as U.S. Highway 2, running over Stevens Pass, or equivalently, the Skykomish River, Nason Creek, and the lower Wenatchee River. This roughly follows Beckey's geologic division in Cascade Alpine Guide.[2] and the definition used by Peakbagger.com.[3] Sometimes the southern boundary is defined by Snoqualmie Pass and the approximate route of Interstate 90.[4] Sometimes the term "North Cascades" or "northern Cascades" is used for the entire range north of the Columbia River.[5]

Geologically, the rocks of the North Cascades extend south beyond Stevens Pass and west into the San Juan Islands. The significance of the geologic transitions to the Okanagan Highland to the east and the Interior Plateau and Coast Mountains to the north are less agreed upon.[6]
Climate

The climate in the North Cascades varies considerably by location and elevation. The western slope of the range is wet and cool, with 60 to 250 inches (1.5 to 6.4 m) of precipitation per year. This produces a temperate rain forest climate in the low valleys, which then grades into montane and alpine climates on mountain slopes and peaks. Summers are comparatively dry, with far less precipitation than in winter; sometimes the warmer eastern air and cooler western air meet at the Cascades during the summer months, and form thunderstorms. Sometimes, the storms move downwind into lowland cities.[7] The eastern slope lies in the rain shadow of the range, since prevailing winds and most moisture come from the west, and hence is significantly drier than the western side of the main divide, becoming semi-arid in the eastern lowlands.[8][9] As with most mountainous areas, precipitation increases dramatically with increasing elevation. As a result, there is a great deal of winter snow and glaciation in the high North Cascades.

The eastern slopes and mountain passes can receive significant snowfall. Cold Arctic air can flow south from British Columbia through the Okanogan River valley into the bowl-like basin east of the Cascades. Cold air damming causes this Arctic air to bank up along the eastern Cascade slopes, especially into the lower passes, such as Snoqualmie Pass and Stevens Pass. The milder, Pacific-influenced air moving east over the Cascades is often forced aloft by the cold air held in place in the passes due to cold air damming. As a result, the passes often receive more snow than higher areas in the Cascades. This effect makes the relatively low elevation ski resorts at Snoqualmie Pass (about 3,000 feet (910 m)) and Stevens Pass (about 4,000 feet (1,200 m)) possible.[10]"

I sure can see why this one made the feature page!! Great presentation!!! v/f/t