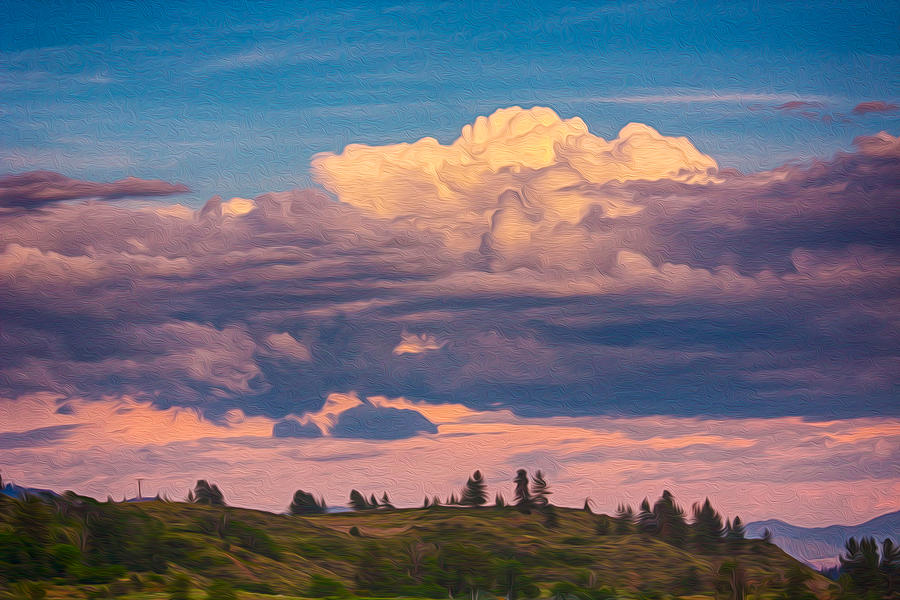 I have just three things to teach: simplicity, patience, compassion. These three are your greatest treasures. ~Lao Tzu

I took this picture looking over the Rendezvous area of the Methow Valley in Washington State. The clouds absorbed the last of the light on the ground and the clear blue above was beautiful to behold.

This photograph was taken in Mazama Wa (Washington State), in the beautiful Methow Valley. The Methow is a small jewel of an area not too far from Seattle in the Pacific Northwest. Okanogan County is such a great place to live for all of the sunshine and outdoors recreation.

I started with a digital photograph and used a HDR process to tone map the light. Then I applied a finishing oil paint layer to add texture to the overall image. I did some tonal work to even out the colors and make them realistic to what I was seeing in nature but not excessively.
I am interested in photography as an "unusual" or "unique" image making process. In other words I enjoy starting with a photograph of an ordinary scene or subject and then I try to make it my own by adding unusual processing techniques. I hope you enjoy viewing my work as much as i enjoy creating it.
---------------------
Explore the attractive custom framing and matting options available on this page; all are competitively priced.
If you have any questions about my images or need assistance with sizing, framing, etc., please contact me, before placing your order, at [email protected]
----------
From Wikipedia
"The Methow River (/ˈmɛt.haʊ/ MET-how)[6] is a tributary of the Columbia River in northern Washington in the United States. The river's watershed is 1,890 square miles (4,900 km2), with a population of about 5,000 people. The Methow's watershed is characterized by relatively pristine habitats, with much of the river basin is located in national forests and wildernesses. Many tributaries drain the large Pasayten Wilderness. An earlier economy based on agriculture is giving way to one based on recreation and tourism.

The river was named after the Methow Native Americans (today part of the Confederated Tribes of the Colville Indian Reservation). The name "Methow" comes from the Okanagan placename /mətxʷ�/, meaning "sunflower (seeds)".[7] The Native American name for the river was Buttlemuleemauch, meaning "salmon falls river".[8] In 1841 the Wilkes Expedition named the river "Barrier River". Alexander Ross said the native name was Buttle-mule-emauch. In 1811 David Thompson met the tribe living along the river and wrote their name as Smeetheowe. In 1853 George Gibbs called the river Methow or Barrier.[9]
Course

The Methow River, along with its tributaries the Twisp River, Cedar Creek, and Early Winters Creek, originates in a cluster of high mountains including Golden Horn, Tower Mountain, Cutthroat Peak, Snagtooth Ridge, Kangaroo Ridge, Early Winter Spires, and Liberty Bell Mountain. Several mountain passes are associated with the Methow River and its tributaries, such as Methow Pass and Twisp Pass. State Route 20 utilizes Washington Pass and Rainy Pass, also in the general areas of headwater streams.

The Pacific Crest Trail follows the uppermost reach of the Methow River, until the river turns east, flowing into the Methow Valley near Mazama. Along the way it collects the tributary streams of Robinson Creek and Lost River. In the Methow Valley, between Mazama and Winthrop, the Methow River is joined by Early Winters Creek, Cedar Creek, Goat Creek, and Wolf Creek. The Chewuch River joins at Winthrop. One of the Methow's larger tributaries, the Chewuch River and its many tributaries drain large parts of the Pasayten Wilderness to the north. One of its headwater streams, Cathedral Creek, reaches nearly to British Columbia, Canada.

The Methow Valley continues below Winthrop to Twisp, where the Methow River is joined by another important tributary, the Twisp River. Flowing from the west, the Twisp River drains the mountains south of Washington Pass as well as the eastern slopes of Sawtooth Ridge, a major mountain range with some of Washington state's highest peaks (such as Star Peak and Mt Bigelow).

Downriver from Twisp, the Methow River passes by the communities of Carlton and Methow, receiving several minor tributaries, before joining the Columbia River at Pateros. This part of the Columbia is the impoundment of Wells Dam, a lake known as Lake Pateros."

Wonderful landscape and colors. Please, could you submit this work in my group "Afternoon and dawn" ?? V/F

These clouds are cool, but I really love the grass on the hillside. Really love your process!

Gorgeous work, Omaste! I love looking at the clouds with magnifier! v/f