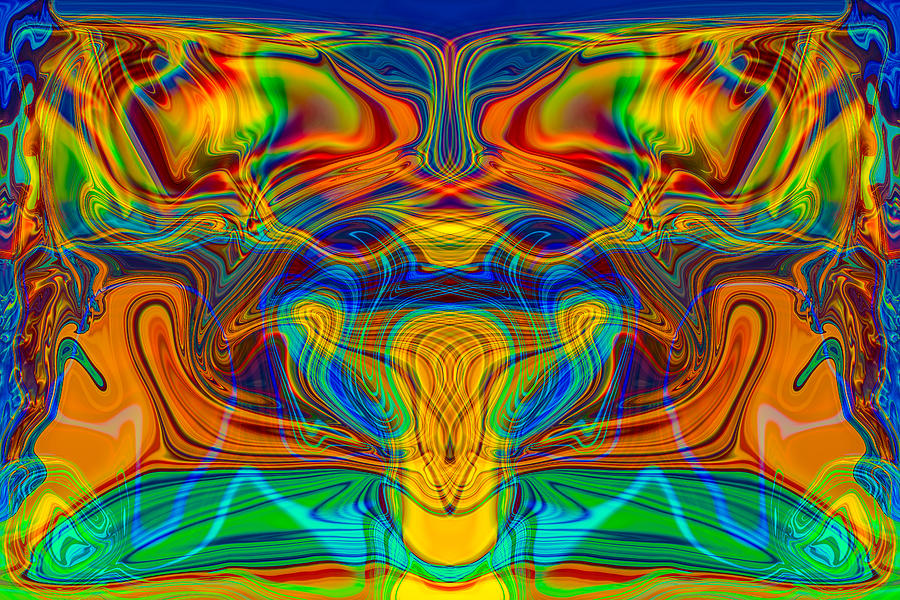 I see a psychedelic Bug Eyed Monster.
This spooky alien beast has a rainbow colored face and a large wide smile. Luckily there are not evil tentacles reaching out.

"Bug-eyed monster is an early convention of the science fiction genre. Extraterrestrials in science fiction of the 1930s were often described (or pictured on covers of pulp magazines) as grotesque creatures with huge, oversized or compound eyes and a lust for women, blood and general destruction. The term is now often abbreviated to BEM.

In the contactee/abductee mythology which grew up quickly beginning in 1952, the blond, blue-eyed and friendly Space Brothers of the 1950s were quickly replaced by small, unfriendly bug-eyed creatures, closely matching in many respects the pulp cover clich�s of the 1930s which have remained the abductor norm since the 1960s.

Artists Boris Vallejo and Julie Bell are famous for their artwork in this genre." - Wikipedia

This painting started out as a picture of handblown glass created by Garth Mudge of Glassworks in Winthrop Wa. Glassworks is located downtown in the beautiful Methow Valley in Okanogan County .
I painted and reflected the original image into a whole new image. I am retaining as much of the original textures as possible. I am using only the colors that originated in the picture when it was a photograph. I am using these colors as a starting point for the picture. Then I choose which textures to use to complement the colors. Then I start painting and when I have painted to my hearts content I create a new layer, reverse it and overlay it onto the original image. I call this a Reflection.
I am really enjoying using the photographs I have taken over the years as starting points for new individual artworks. I lover the tools that are available to help us create ever new and changing art works. A Wacom tablet and Photoshop software have opened up a whole new world of creative options for me