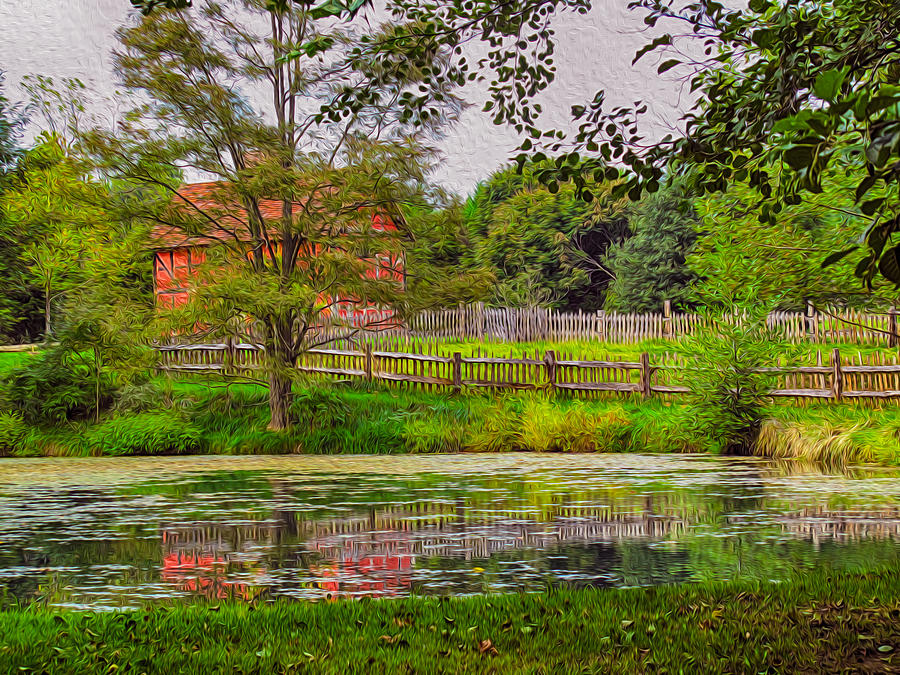 This 1600s English Farm is located in Virginia at the Frontier Culture Museum. It is a place that I visited with my family when we were on vacation a few years ago. I really enjoyed the color of the home and the corresponding reflection on the water. It is such a nice contrast with the other colors present.

I started with a digital photograph and used a HDR process to tone map the light. Then I applied a finishing oil paint layer to add texture to the overall image. I did some tonal work to even out the colors and make them realistic to what I was seeing in nature but not excessively.
I am interested in photography as an "unusual" or "unique" image making process. In other words I enjoy starting with a photograph of an ordinary scene or subject and then I try to make it my own by adding unusual processing techniques. I hope you enjoy viewing my work as much as i enjoy creating it.
---------------------
Explore the attractive custom framing and matting options available on this page; all are competitively priced.
If you have any questions about my images or need assistance with sizing, framing, etc., please contact me, before placing your order, at [email protected]

-------------
From Wikipedia "The Frontier Culture Museum, located in Staunton, Virginia is a living history museum that tells the story of the people who migrated from the Old World to America and the life they created in the Shenandoah Valley. The Museum is made up of original or reproduced examples of traditional buildings from the Old World and America.

English colonization of North America began with the founding of Jamestown in 1607. Over the next century other English colonies were established along the Atlantic coast of what would become the United States. By 1700, almost 250,000 people, most of whom were born in England or were of English descent, lived in the colonies.

Virginia was England's first North American colony, and as many as 120,000 English migrants arrived here in the 1600s. Some colonists were granted land where they established tobacco plantations worked by white indentured servants and African slaves. Settlement slowly crept westward into the piedmont, and by the mid-1700s Anglo-Virginians crossed the Blue Ridge and began to settle in the Valley of Virginia.

English culture and traditions were dominant in England's North American colonies due to the numbers of English settlers, and the role the Crown and English proprietors played in establishing these colonies. In Virginia, this culture quickly took on the characteristics of southern England. This took the form of a patriarchal and hierarchical society led by the "gentlemen" of the colony. With the arrival of other ethnic groups and the emergence of political democracy during the era of the American Revolution, this traditional culture faded. What endured were American versions of English language, law and government, morality, and an ideal of individual liberty" http://www.frontiermuseum.org/england.html

Love the reflections and pretty rural scene along with the oil paint applied Omaste! We voted! Celebrate life, Debra and Dave

This is lovely. I like the barn showing through the tree. voted and favorite

What a beautiful find. v

Awesome painting! I love the vivid colors, reflections, and detail!!