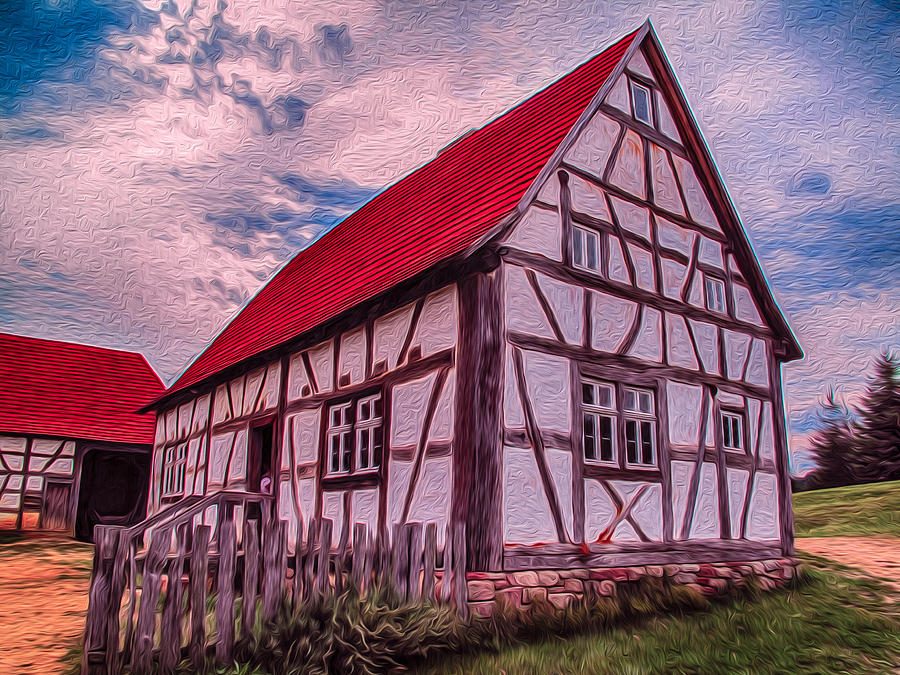 This 1700s German Farm is located in Virginia at the Frontier Culture Museum. It is a place that I visited with my family when we were on vacation a few years ago. I really enjoyed the color of the roof and contrasts.

I started with a digital photograph and used a HDR process to tone map the light. Then I applied a finishing oil paint layer to add texture to the overall image. I did some tonal work to even out the colors and make them realistic to what I was seeing in nature but not excessively.
I am interested in photography as an "unusual" or "unique" image making process. In other words I enjoy starting with a photograph of an ordinary scene or subject and then I try to make it my own by adding unusual processing techniques. I hope you enjoy viewing my work as much as i enjoy creating it.
---------------------
Explore the attractive custom framing and matting options available on this page; all are competitively priced.
If you have any questions about my images or need assistance with sizing, framing, etc., please contact me, before placing your order, at [email protected]
--------------
"Background:
Germans were the largest group of non-English speaking Europeans to settle in colonial America. Between 1683 and 1776, roughly 120,000 German-speaking immigrants arrived in the colonies. Most came from the southwestern states of the Holy Roman Empire, particularly the Palatinate, Baden, and WŘrttemberg on the middle and upper Rhine River.

The chief port of entry for German immigrants was Philadelphia, and from here they spread into the countryside in search of land. Many of the early arrivals settled in southeastern Pennsylvania near Philadelphia, but others pressed further west beyond the Susquehanna River and south into Maryland. Over time, German-speaking colonists found their way into the Great Valley of the Appalachians and, by the 1730s, across the Potomac River into the northern Valley of Virginia. In the decades that followed German settlers and their American-born descendents continued moving south and west, leaving a distinctive mark on American culture wherever they settled.


Contributions to American Culture:
Germans carried their language and culture with them to the colonial American backcountry. In many places, including the Valley of Virginia, traditional German culture persisted through the mid-1800s before many of its traces faded. Pottery, painted furniture with lavish decoration, and the Pennsylvania, or "Kentucky," Rifle were among the most dramatic German contributions. Germans also valued the freedom they found in America, though liberty was more personal than political for them, and they valued independence for their communities over public service." http://www.frontiermuseum.org/germany.html

Thank you very much to the art collector from Meridian. I appreciate you :-)

Really cool looking barn! It's amazing how long and strong these barns are built! I hope all is well with you over there in Eastern Washington! Thanks for all your visits and features. I am slow to reply... carpel tunnel... ouch... anyways back to YOUR work.. lovely! FV

Very cool German farm painting, I love the way you have done this!

Lovely image I like the prosesing great work Omaste

you have worked your magic once again! beautiful

love the colors and how you processed it :) v