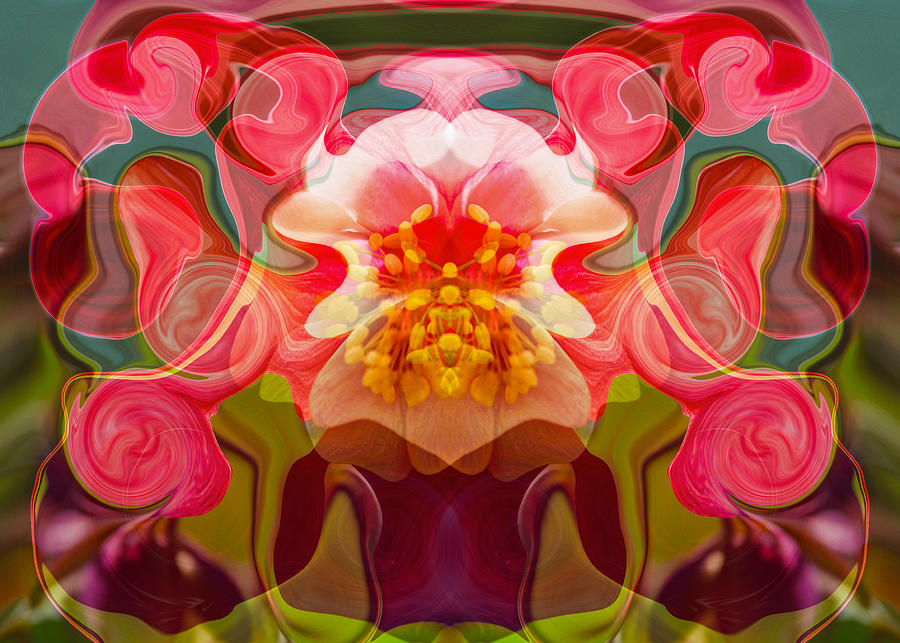 I see the essence of a child in this photograph of a flower.

"Flower child originated as a synonym for the children of Billy Ray Williams and his then wife Hazel Payne Williams who made and sold paper flowers while living on Haight Street, starting in the early 1960s. The two older daughters, Charlotte and Victoria, wore flowers in their hair while selling the paper flowers to tourists visiting the Haight Ashbury neighborhood. It eventually became a synonym for the idealistic young people who gathered in San Francisco and environs during the 1967 Summer of Love. It was the custom of "flower children" to wear and distribute flowers or floral-themed decorations to symbolize altruistic ideals of universal brotherhood, peace and love. The mass media picked up on the term and used it to refer in a broad sense to any hippie. Flower children were also associated with the flower power political movement, which originated in ideas written by Allen Ginsberg in 1965." - Wikipedia

This painting started out as a picture of a flower in my garden. Located in the beautiful Methow Valley in Okanogan County.
I painted and reflected the original image into a whole new image. I am retaining as much of the original textures as possible. I am using only the colors that originated in the picture when it was a photograph. I am using these colors as a starting point for the picture. Then I choose which textures to use to complement the colors. Then I start painting and when I have painted to my hearts content I create a new layer, reverse it and overlay it onto the original image. I call this a Reflection.
I am really enjoying using the photographs I have taken over the years as starting points for new individual artworks. I lover the tools that are available to help us create ever new and changing art works. A Wacom tablet and Photoshop software have opened up a whole new world of creative options for me

Thank you to my anonymous buyer from Winthrop, WA. I hope you enjoy my artwork, and I love that you had it printed on a canvas. It will look really nice and will hopefully be enjoyed for years to come.

Congratulations, Omaste, on another sale.

Congrats on your sale.

Congratulations Omaste on the sale of this beautiful artwork!

Congrats on your sale, Omaste!!

Congratulations on the sale of your art!

Thank you Sandra for Featuring my artwork in the Abstract group.

Thank you Nadine and Bob for Featuring my artwork in the Artist News Group.

Thank you Nadine and Bob for Featuring my artwork in the Beauty of this World group.